“We have to know the history of our struggles!” 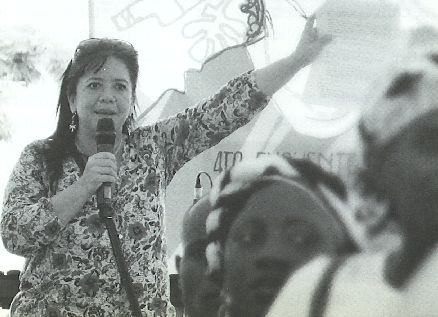 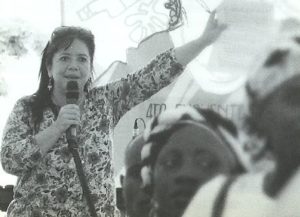 Berenice Celeyta is a human rights activist and one of the founders of NOMADESC, a Colombian NGO. NOMADESC was created in response to the violent onslaught of paramilitary death squads against social movements and communities from 1999 onwards, and the impact which it was having upon movement organising. The organisation developed a ‘popular education’ programme which brought together such diverse groups as indigenous, afro-descendent and peasant communities, urban shack dwellers, trade unions and students groups. Through their popular education work, Nomadesc have for over 15 years sought to provide participants with the basic tools for human rights defence, and also to renew, connect and intensify social movement struggles in the region. Today the organisation is building on this work, working with movements and organisations across the southwest of Colombia to establish the Universidad Intercultural de los Pueblos (Intercultural University of the Peoples), a ‘popular university’, run by and for social movements.

What factors have influenced the development of Nomadesc’s popular education work?

Firstly, it is important to say that our pedagogical work has been shaped by many factors, including the armed conflict, colonialism, the economic model imposed on Latin America – neoliberalism…all of these different forms of violence. This is the context in which we have had to educate- not only in Colombia, but across Latin America. Our work is influenced by Brazilian educator Paolo Freire (regarded as the father of Latin American ‘popular education’), and builds upon the Colombian tradition of popular education developed by Fals Borda and Umaña Luna who inspired the theme of ‘social humanism’ and argued that to bring about change we needed to create our own educational processes.

Could you outline the principles which underpin Nomadesc’s popular education work?

A central idea for us is that of the dialogo de saberes (dialogue of knowledges), which is based on concepts which have been used in popular education and critical pedagogical processes in Latin America, from Paolo Freire and Orlando Fals Borda onwards. It is based firstly on the principle that everybody has something to contribute, no matter what their background is, whether they can read or write or finished education – there are different types of knowledge. For example, the peasant knows about their seeds, when they need to plant, they can predict the weather, they have all kinds of knowledge. In Colombia, our social sectors all face the same state violence, but we have different histories, different cultures, and this shapes our different struggles. Our indigenous peoples have a distinct ancestral history to our black communities, to our trade unions. With the dialogue of knowledges, we hope to bring them together, not with the aim of making everyone think the same, but with the aim of learning from each other in order to mutually strengthen our struggles, and find points of convergence. It’s about building strength and unity out of our diversity, not by ignoring our diversity but by seeing it as a strength. So we try to create spaces which allow for a dialogue of knowledges, in order to find strategic and thematic unity – points of convergence which allow us to join struggles and strengthen our movements. This includes inter-generational dialogue, in this way we’ve been able to share the knowledge of indigenous or afro-descendent elders, or veteran trade unionists, so that this knowledge and history is preserved within our struggles.

I’ve heard you talk often about memoria historica (historical memory), how does this this relate to Nomadesc’s pedagogical work?

We believe that those who don’t know their history are condemned to repeat it. In Colombia this means asking who, when, how, why, in terms of the barbaric violence which has been committed, and which has broken down the social fabric. Historical memory is fundamental to any pedagogical process. If we are going to strengthen the social movement and rebuild the social fabric, we have to know what has happened before and why. We have to understand why and how 524 years on from the invasion of the Spanish, the British and Germans to Latin America, resistance still exists – we have to know the history of our struggles!