“We learn from each other not from a book” 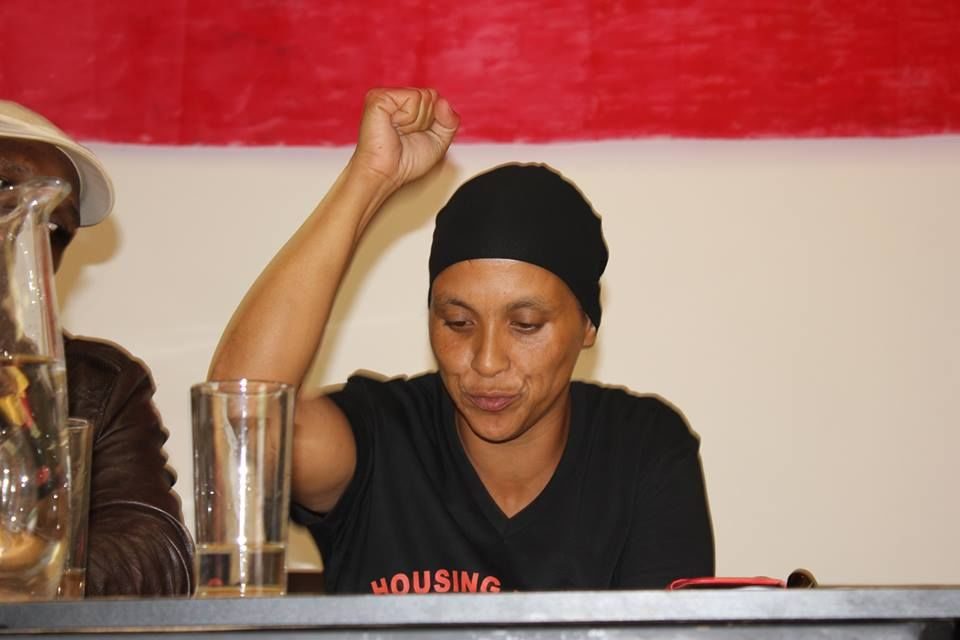 Faeza is the deputy Chairperson of the Housing Assembly – a social movement fighting for the right to decent housing, organising the poor who live in informal settlements, in backyards and inadequate social housing including rental stock in the Western Cape, South Africa. Today, into its fifth year, the movement has over 6,000 members with a core of committed and passionate activists, most of whom are women.

What prompted the formation of the Housing Assembly as a social movement?

In 2011, just before the national elections, we were facing eviction. Seventeen years into democracy, there we were living on an open field, facing down the police. Politicians were making the same promises as they did in 1994. While we were sitting in that open field thinking about our options we were told about a community activist course. When we turned up for the course, on the walls were all these words – Neoliberalism, Capitalism, Privatisation. I was so scared – I thought to myself ‘you didn’t finish school, how are you going to know these things?’ We only came back to the course because we could wash ourselves in the bathrooms, have coffee and some food. But we caught on that there was important information here and we were greedy for knowledge. The most important thing was being in the same room with people who were facing the same situation. It’s one thing hearing about a situation and what you should do from someone who has not gone through the experience and another being able to share stories and generate solutions from people who have lived through the experience.

I remember at one point during the evictions in 2011 – we were facing the railway police which came fully armed to evict us. We stood up to them and told them that they couldn’t evict us without a high court order. With that simple piece of knowledge we stopped the eviction. We didn’t learn that from a book –we learnt that from other activists who had been through the same experience.

It became clear that we needed to build a collective of these communities that had the same experience of bad housing and evictions. The Housing Assembly felt like a safe space to build a movement with people who lived the experience. They have passion, commitment and urgency.  Its different for someone who comes into the struggle and goes back to his or her home and is able to turn on the tap or switch on the electricity  – there is no urgency there.

What I have noticed is that no matter which area I visited with the Housing Assembly, communities knew why they were living in a shack – there was a deep political understanding of this.

My experience, along with others in the Housing Assembly, was that people were embarrassed to talk about their situation of living in a shack, not having a job or being in debt. This is due to the society we live in, where people are made to believe that they are responsible for their own poverty. Through learning and sharing with other radical activists we came to understand that it was the capitalist system that was creating poverty. We have taken this into our organising work in the Housing Assembly. Through the door-to-door method we meet people in their homes – this becomes a safe, private space to talk about their situation. When people talk about their living conditions, they blame themselves. Then we start asking critical questions – for example, why does social housing in Pelican Park have water meters to restrict the use of water, while rich households in Constantia don’t? We keep asking the critical questions that lead people to understand that the only way they can get out of poverty is by changing the system. And we do this through door-to-door visits – listening and sharing knowledge. You will not believe the relief people feel when they realise that the burden of poverty is not because of them – but because of the system. At that point everyone wants to become an activist!

You have often said that you didn’t choose to become an activist but that activism chose you. I feel like you were born with activism in your blood.

People always saw me as a trouble maker which I just saw as another word for activist. Growing up under apartheid, I quickly noticed the inequality – white people having everything and my mother having to work so hard to support our family. Sometimes we would go without food or electricity. I remember as a child watching this truck filled with bread driving through our community. I asked my mother where this bread was going to and she said it was being taken to feed pigs on a farm. Yet all around me, including in my own family – people were starving. It forced me to look at things critically, to ask the difficult questions and to always challenge the status quo. With that kind of outlook on life, it is difficult not to be an activist – so I feel it wasn’t a choice, it was something I had to do.